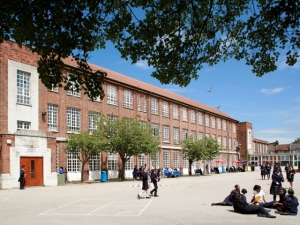 The first school on the Connaught Road site was a temporary mixed school which opened in 1900 and was discontinued after 4 years.

In 1932 the school reopened as Connaught Road senior girls school with a junior mixed department.  The reopened school was the only Leyton school to be built between the two world wars under the Leyton School Board 1929–32 reorganisation programme.

The junior mixed department closed in 1948 when the school became a secondary (modern) school for girls, taking over its adjoining premises.

In 1960–1 the school annexe was built on Madiera Road to accommodate the science and PE departments.  In 1964 the main site was extended with a new dining room and main assembly hall.

The school became a community secondary 'comprehensive' school for girls in the 1970's.

In February 2013 the school converted to become an state funded independent academy for girls aged 11 to 16.