There were many Connaught students who achieved exceptional GCSE results in in the first year of a new system where English and Maths qualifications have changed significantly, including: 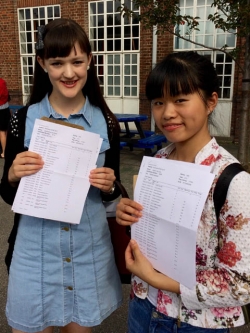 I can’t believe my results. I’m really happy. All the hard work has paid off and I can to study Maths, Further Maths, Physics and Biology A levels . Romana Chowdhury, student.

I’m now going to study A levels at Bancrofts School. I am very happy with my results. I was really pleased to get a grade 9 in Maths. All the hard work was worthwhile. Zoe Webb, student (pictured, left, left)

We’re thrilled with her results. She has done so well, we’re very proud of her. She has done very well at Connaught. Parents of Rukhsar Shaikh.

Headteacher Ms Sally Walker said “I am extremely proud of the achievements of our girls. Many students have gained excellent results and a number of our girls have made outstanding progress. I would like to thank the staff at Connaught for their dedication and the support they have given to the girls which has contributed significantly to their success. In addition, I would like to thank all our parents and carers for the support and encouragement they have given to their daughters. Finally, I congratulate all the girls and wish them every success in the future and a happy and fulfilling life.”